Is Mike Trout Already a Lock in the Hall of Fame?

There are many great baseball players in 2022. The greatest of these players will likely end up being voted into the Baseball Hall of Fame five years or longer after they retire from playing baseball. The history of baseball proves that even some of the greatest players of certain decades sometimes face hurdles to getting their plaque in the Baseball Hall of Fame in Cooperstown, New York.

Mike Trout is undeniably one of the greatest current baseball players. He just hit his 1,500th hit, and on his first home run since July 8. He has better than a .300 career batting average. He is a perpetual All-Star and has been in the MVP chase many years. And it’s up to his fans to decide if his 338 home runs is even his next best career stat.

The question that Mike Trout collectors will want to address as the 2022 season starts to wind down is whether or not Mike Trout would be assured a plaque in the Baseball Hall of Fame if he had to immediately retire from baseball. After all, this was considered a risk less only about a month earlier. Trout is approaching the end of his twelfth season at age 31.

This is a view that may only matter to the hobby of sports collectibles and those fans who are 100% into Mike Trout. In fact, the only reason that this is being addressed is because Mike Trout is one of the most chased players for high-dollar modern baseball cards. Image below by Topps via Topps Now. 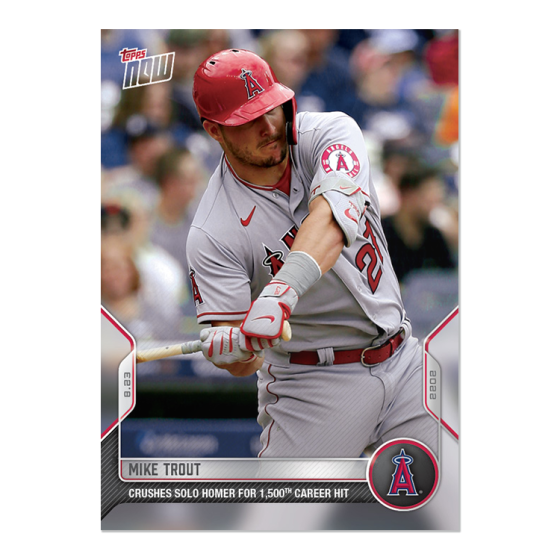 Mike Trout cards haven’t just fetched high price tags in auctions. That’s even in light of the recent $12.6 million Mickey Mantle card and the recent $7.25 million Honus Wagner card sales. Having ANY card sale over $1 million is impressive. Trout already has that claim even though he is still playing.

And we can add in that the fans (and the hobby) love Mike Trout more than most other players. And Trout has had nine seasons where he was in the Most Valuable Player chase.

But injuries, short seasons, and aging…

News reports this summer had some fans believing that Mike Trout’s career might have come to a sudden end due to a rare condition in his spine. Trout has since returned and fans got the joy of seeing him hit his 1,500th hit on a solo home run. No slouching feat by any standards.

One ongoing issue outside of 2022 is that Trout has not really played a full season since 2016. The COVID-19 season for 2020 was an issue for every other MLB player as well, but Trout has suffered many injuries from playing baseball.

Some injuries can be avoided by some players on or off the field. Other injuries simply cannot be avoided and are just a risk being a pro athlete.

Every great athlete ages differently. Some players can play at a high level well into their forties. Some players start aging in their late twenties or early thirties. And some players get injured on and off the field from the onset of their career.

Stats then versus now…

Mike Trout had enough speed, power and consistency from 2012 through 2016 to easily get continual Mickey Mantle comparisons. He has also had massive annual contractual payments since.

Trout led the league with 49 stolen bases in 2012, but he rarely steals bases any more. And in 2022, his batting average is just .274 and his on-base percentage is currently the lowest of any season besides his 40 games in 2011.

It is unknown if he will make it for 100 games in the 2022 season as of yet after injuries, but this again goes back to not having a full season since 2016.

And about those super high-dollar cards…

It was in 2020 when the record-breaking Mike Trout card sale for $3.84 million (image below from GoldinAuctions.com) was seen in his 1-of-1 Superfractor took place through Goldin. These are just some of the other top known sales that have been seen at auction houses, and the results do not include top sales from elsewhere:

And about a plaque in Cooperstown…

If Mike Trout is able to keep playing at anywhere close to his current level and stays relatively healthy he would be a lock to get into the Hall of Fame. We cannot forget that he was batting a stellar .333 in 2021 before that calf injury took him out for the year (and his pace was for 35 more homers and 160+ hits).

If Mike Trout keeps facing injuries in his coming seasons that allow him to have good stats for the games he plays, he’s still probably a lock to get into the Hall of Fame. Keep in mind that Mickey Mantle retired at age 36 in 1968 and his last 150+ game season was in 1961.

If something happens where Mike Trout is unable to play and is effectively forced to retire or if he magically decides he has had enough (highly unlikely) then the debate about being a lock into Cooperstown may come up.

And something that needs to be brought up over risks would be if there were any unspecified scandals that is simply a risk for any modern player.