The 1948 Leaf baseball card set is a thing of beauty for vintage baseball card collectors. It is effectively among the first U.S. mainstream card sets released in the aftermath of World War II. This set also helped to set off what would become a race for dominance in the sports card market all under the effort of selling more bubble gum. One fascinating issue about the 1948 Leaf set (which was actually the 1948 to 1949 release in series’) is the instance of print variations — mostly regarding coloring variations in the background surrounding each player’s photo image.

There are other debatable issues around the 1948 (and 1949) Leaf baseball set. It was skip-numbered and the copyright dates generally say 1948.

Collectors generally pay a premium for error cards and variations. Despite the prominent color of the backgrounds, there has not been a significant premium or discount for color variations in the 1948 Leaf cards.

Leaf welcomed the effort of getting many baseball greats back into the hands of young boys in 1948 with a slew of stars and super-stars. Bowman eventually signed many players to exclusive card contracts after 1948, which made this a short-lived effort.

Some of the great cards from the 1948 Leaf set are counted as the yellow Jackie Robinson (#79) and the Leroy Paige (Satchel) rookie cards. Without worrying whether the rest of these set’s cards are rookies or not, other greats include Stan Musial, Ted Williams, Warren Spahn, Phil Rizzuto, Joe DiMaggio, Ted Kluszewski, Johnny Mize, Bob Feller and others. And in a special tribute of the era, Leaf also included portraits of the retired and recently (then) deceased Babe Ruth as well as a then-coaching Honus Wagner card that shows a huge cheek-full of chewing tobacco.

While the 1948 Bowman set of baseball cards focused on the active players of the day, many collectors continually refer to the black and white ugliness and poor imagery of the set. Some of the 1948 Bowman cards look like they could have inserted serial numbers with a sign under each player because some like the Stan Musial card look more like mugshots. Having the great cards of Jackie Robinson and Satchel Paige gave Leaf a clear lead over most of the Bowman “rookie cards” of the era, ditto for existing players like DiMaggio and Williams.

But one issue that keeps coming back to mind is of course the print color variations of some key cards. You sometimes see these variations on eBay, at shows and in auction houses. All in all, there is just really very little explanation about what the color variations are from. Was it print run variations of series from 1948 to 1949? Was it skimping on ink after years of tight supplies from World War II? Was it ink supply shortages?

One obvious answer may be that baseball card and trading card companies of the era simply didn’t care about the quality control of their cards. They were selling bubble gum after all to a bunch of kids who didn’t know better or didn’t care at the time.

The easiest and perhaps most palatable explanation for color variations could also be that the base colors used for the background were stretched thin in the printing process to handle more cards being printed for no additional cost to Leaf beyond the cost of the cardboard. After all, if they are releasing cards off-center to where the images may be almost off the card then who cares if red turned pink/magenta, green turned yellow, or if blue and purple happened during the same set.

Another explanation would be even easier to assume — the color variations were simply seen in later print runs. The Leaf set ran in 1948 and many cards were printed in 1949. There were not exactly price guides and grading services for what were the then-modern cards. And getting players to sign baseball cards didn’t become popular for another generation. Most boys and men seeking signatures in that period carried a small autograph booklet and the players would sign on an index-card sized white page.

The green variation of the Joe DiMaggio is by far the most common, but there is a more yellow (or yellow-green) variation that is considered more scarce. Some of the dark colored boxes for the player names at the bottom of each card even have print color variations. Cards of Ted Williams and Phil Rizzuto that have red backgrounds occasionally come out pink or magenta depending upon how you see them. See my own Ted Williams photo variation below. Stan Musial’s 1948 Leaf card is far more attractive visually than his 1948 Bowman “rookie” card. That said, the traditional blue color can come with multiple variations. There are bright blue cards, light blue cards, cobalt blue cards and even virtually purple variations. See the PWCC Marketplace gallery of 12 images below and it will prove the point. The Gene Hermanski is a very tough card to find without the ‘i’ in his last name and these cards almost look night and day in a CardboardConnection piece discussing the various variations and mysteries around the 1948 Leaf baseball set. And then there is a thread on the Net54 opining and explaining some other theories on the variations which has brought on many comments.

One last issue which has shown up over time is that sheets of cards and stacks of cards were also stacked too soon after the printing. This has left ghost images on the back of many cards, and some one the front of cards, something similar to the 1933 Goudey cards of Babe Ruth and others. And this also leaves some reverse prints backs on the front of cards as well (see below).

We will leave the debate up to outsiders and experts about the real rationale behind the print color variations. The main reason is that it’s just not clear based on any easily identifiable explanations and in 2022 it would be impossible to find anyone who was on the printing line for Leaf in 1948 and 1949.

If we had to guess, the company was either were running short of certain ink colors for some print runs of these cards or a manager decided they could save Leaf Gum Co. some cash by letting certain colors not be as dark and vibrant by stopping print productions.

There are of course many other errors and variations that were seen. Some cards are printed with no backs. Some cards are missing pigment entirely. Some images can vary. The color variations are perhaps the most commonly seen issues with the 1948 Leaf cards, and that is what has drawn this interest. And then there are boxing and football cards of the same design — but that’s another story entirely.

The 1948 Leaf rookie card of Jackie Robinson is supposed to have a bright yellow background around his face. This card seems to have rampant print line defects on the cards, the cards can be blurry, and centering issues are notorious.

If you have any ideas or exact knowledge about the 1948 Leaf printing defects, errors and variations please send an email to editor@collectorsdashboard.com to help out. Sometimes vintage baseball card analysis is not an exact science and some people just know more than others.

Here are two eBay images showing the backs of cards appearing as ghost images over the front of the card, one much more well known than the others. 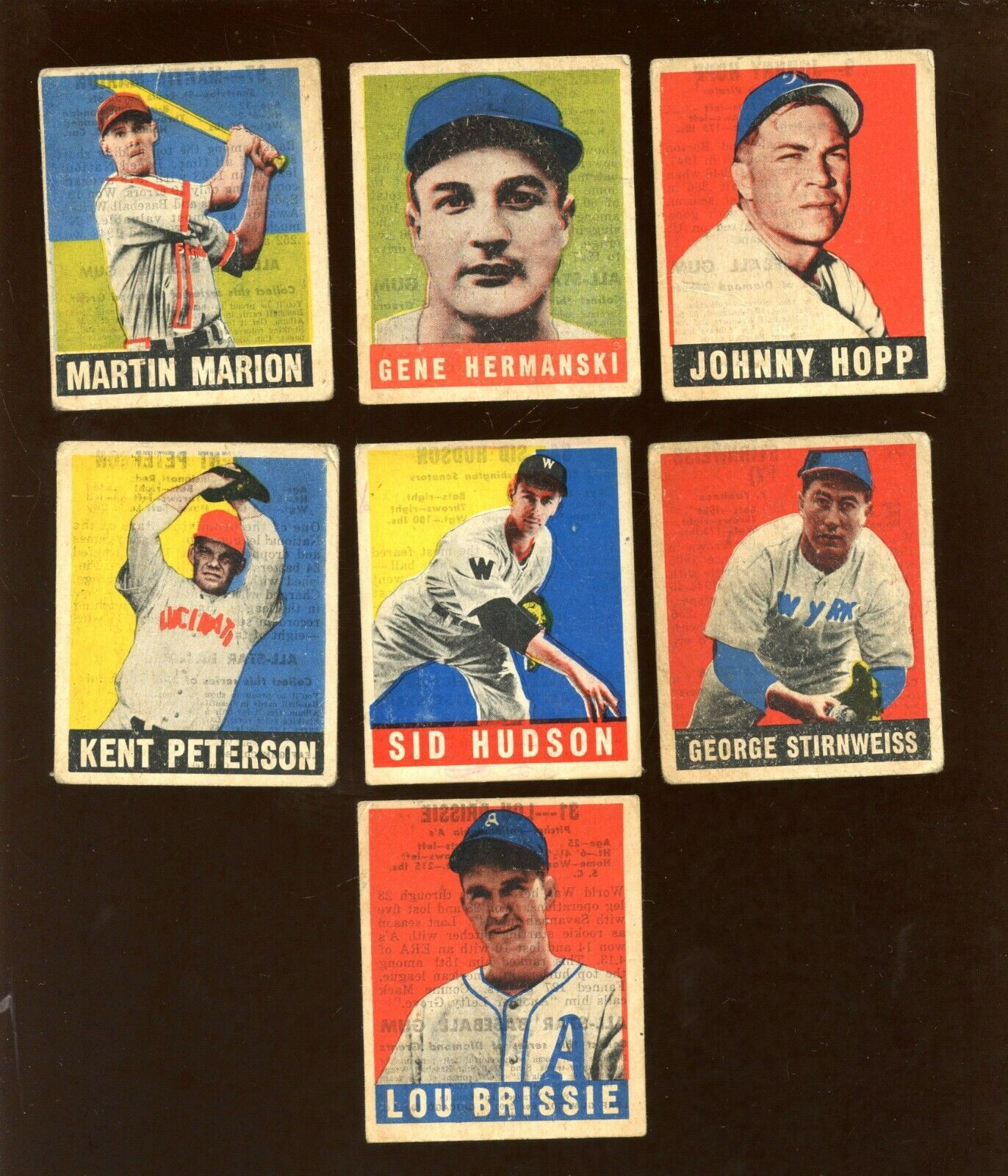